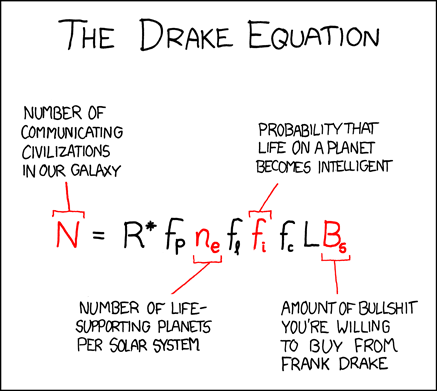 It is obviously difficult to comment on the sociology of a possible extraterrestrial civilization. A fact which seems nevertheless to be essential is that such a civilization would inevitably end up seeking to spread itself beyond its planet of origin. One can quote three reasons for which this objective seems natural:

Exploration consists of sending a mission towards other stars once the necessary technological level are reached. There is hardly a doubt that this must happens one day, whether it is by curiosity or for prestige reasons.

Colonization as this is the underlining goal of most terrestrial civilizations since the beggining of times, for religious reasons as well as for economic or political reasons. Unless we assume that other intelligent beings would be more reasonable than us, the temptation of colonization would then be probably widespread.

Lastly, the third reason, and surely the more important one is survival. The lifespan of a star in a stable form is limited. For example, in approximately 5 billion years, the Sun will cease to be the stable star which we know. It will become a red giant that will probably absorb the Earth. Under these conditions, sooner or later, space flights and interstellar flights will prove to be essential to the humanity’s survival. Any extraterrestrial civilization will be one day or the other confronted with a similar problem.

Are we the only technologically advanced age of the Universe? The Drake’s equation are based on multiple factors such as the fact that there are an estimated 250 billion stars in the Milky Way and 70 sextillion (7 x 10.22) in the visible universe.

Taking the historical values given by Drake and his colleagues in 1961:

Taking into account the original estimate, the result rise to 0.08 civilizations in our galaxy.

While these calculations result in N<<1, some observers believe this is still compatible with observations due to the anthropic principle:

no matter how low the probability that any given galaxy will have intelligent life, the galaxy that we are in must have at least one intelligent species by definition.

There could be hundreds of galaxies in our galactic cluster with no intelligent life whatsoever, but of course we would not be present in those galaxies to observe this fact.

Enrico Fermi assumed the existence of only one extraterrestrial civilization capable of intersidereal travel (at a speed lower than the speed of light). He assumed that this civilization would be interested in the conquest of the Galaxy and that it progressed by jumps, colonizing a planet during a few hundred or thousands years, then sending tens of vessels towards new conquests.

The problem is that after only a few million years, the whole of the Galaxy is under the influence of this extraterrestrial civilization (the low rate of travel being largely compensated by the exponential increase of the vessels number).

Simulations of an expansion show that it is possible for one civilization to colonize the whole galaxy in about 10 million years, a short time compared to the age of the Galaxy (ten billion years).

The question then arising, and famously formulated by physicist Enrico Fermi in 1950: since only one extraterrestrial civilization could spread in a relatively short time, how is it possible that that we never saw the extraterrestrial ones and that our radio telescopes never collected signals of suspect origin?

What do you think? Leave your thoughts below!

If we define, for the sake of this article, a "paradox" as two or more self-contradicting statements with no apparent resolution, then why do we call Fermi's question a paradox? There seem to be a number of plausible suggestions for why we haven't heard from the Klingons: 1) They aren't on our timeline (lifetime of civilizations never intersected) or 2) they are using a totally unknown technology to communicate which we cannot intercept, or 3) they just don't care to communicate with us for a variety of reasons.

by Han on Fermi's Paradox
What About This?

August 2018, i awake at around 5.30 in the morning and saw a shining red light outside my house. I went outside and saw one straight vertical line about 100 feet above my house in the air. It emit white light (in the centre) from top to bottom 150 feet long. The vertical light is rounded with reddish or orange light from top to bottom (and the reddish light turn in small circular motions). I took my samsung phone for a picture and video of it but nothing appear in my phone. Then i called my two sons to look at it and they were amazed by what they saw. Both try to take pictures and photo with their phones (Honor and Huawei phones) and nothing captured by both phones. I called my wife and she tried to capture it with her VIVO phone and still nothing can be seen in their phones. So we just stare and look at it and trying to understand what it is. I just keep looking and waited until 6am and it just disappeared under the sunlight.

I do wonder about the phenomenon of time and how theorists measure it. Is there some consensus and knowledge of that phenomenon, or is the ceasium standard the basis of that measurement, which only leads to more questions? How do theorists include or account for the relativistic nature of our observable universe in their models?

by David on Fermi's Paradox
questions

the main problem with this line of thinking is that it assigns HUMAN motivations to what would be a completely different form of life.

1) EXPLORATION: You can't assume that this intelligent species would be "curious" in the sense that we are. That's a product of our evolution, not theirs.

2)COLONIZATION: how can it be the goal of most "civilizations"? We have only one, ours, to use as an example. Again, another life form may have no need to colonize. If they control population and manage resources then there's no need. The problem is that humans do neither of those things.

3)SURVIVAL: Our civilization can't even plan to save ourselves 50 years ahead, why assume they would plan for billions of years into the future?

so many assumptions, made through the human lens. It may be that space travel is simply not technologically feasible. It may be that another civilization achieved it to a limited degree...if they didn't come here how would we know if they achieved it?

by fjgiie on Fermi's Paradox
No Close Aliens

We can make up many answers to the Fermi paradox, but wouldn't it be great if there were nothing supernatural in the answer.

Is there a possibility that intelligent Extraterrestrials are rare? If ETI were so rare that there would only be one population in a million galaxies, then they could be very far apart and never see each other. A distance of 500 Light Years would make for quite a space voyage, if you knew where you were going. The aliens would never have any kind of contact.

by Michael on Fermi's Paradox
There is no Fermi Paradox

Fermi did not assume the existence of only one extraterrestrial civilization capable of intersidereal travel. He asked "Where is everybody?" and assumed that either interstellar travel is impossible or not worth the efforts or civilizations would go extinct before they are able to implement and finish an interstellar journey. Michael Hart and Frank Tipler did formulate the argument you call "Fermi Parodox" - but there is no paradox either.

If no E.T.s are here that does not mean 'there are no E.T.s everywhere'. Our current physics says: no faster-than-light travel is possible, and there are no loopholes. If this is true, than interstellar travel is costly in terms of time and energy, and you have to be very desperate to try. And why should anyone to try to colonize such an universe by using e.g. self-replicating machines? Where would be the profit?

All SETI activities so far concentrated on radio and very small spheres in space. We don't know what's beyond, and why should any aliens use radio waves to communicate?

by Peter Hodges on Fermi's Paradox
Fermi Did Not Assume

He questioned the assumption of such a thing as an "extraterrestrial civilization" and used a very simple argument to disprove it. In fact, there is no paradox. The value of "N" is 0 and we are alone.

I find it strange to consider human life on earth as "intelligent". A "civilization" that put most efforts into destroying itself is in my view a premium example of natural stupidity.

We thank our buddies at https://williamspromocodes.co.uk for supporting this website!