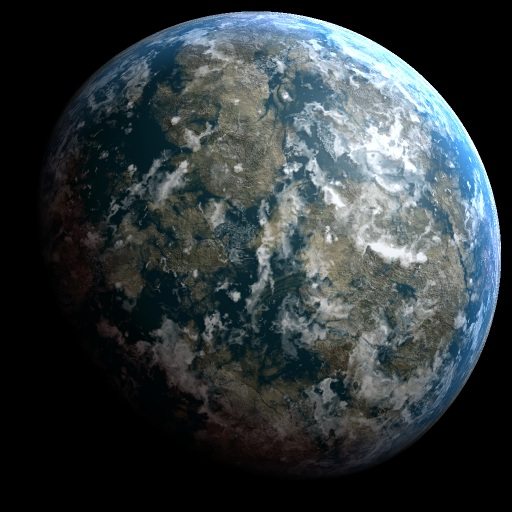 Even if the conditions which gave rise to the life are still far from being clearly identified, it is nevertheless clear that the appearance of life can be explained by natural phenomena, without calling upon any external intervention. If these events happened within the original environment of Earth, it is possible that they also occurred elsewhere. It would be then be interesting to establish the minimal necessary conditions for the appearance of the life, at least in a form similar to that which started on Earth.

Which stars are favorable to the emergence of life?

Which are the conditions that such stars must fill to be favorable to life? Let’s notice first that a single star as the Sun seems more favorable to the appearance of the life. Indeed, in a twin or multiple system, there is no stable orbits for possible planets, which makes it very difficult, even impossible, for life to appear.

What should be the mass of this star? In its stable phase, its mass should be between half and the double of the Sun’s mass. A lower mass would mean reduced luminosity, i.e. a probably insufficient energy contribution to the appearance and maintenance of life. Additionaly, a star much more massive than the Sun would also be unfavourable, but in this case because its lifespan would be too short. A billion years was needed for life to appear on Earth (and 5 billion years to lead to the intelligence). A star of 10 solar masses remains in the stable phase for only a few million years and a star of 3 solar masses for 200 million years. Obviously, it doesn’t prevent the appearance of primitive forms of life around those stars.

There is also a chemical constraint in the composition of the star. Indeed, the first generation of stars in the Galaxy was formed only of the products created by the Big-bang: primarily hydrogen and helium. The heavier elements appeared only during the evolution of these first stars. However, life needs other elements and in particular carbon, oxygen and nitrogen, from where it needs a star of the second or third generation.

The planet Earth as an extrapolation of planetary habitability

What are the conditions a planet must meet to be likely to accomodate the life?

First is the size of its orbit. The distance from the star to the planet must be well adjusted so that the planet receives a quantity of optimal energy. Too near, like with Venus, and the planet would be receive a too important flow of energy and would become too hot. Too far, like with Mars, and it would not receive sufficient energy and would be too cold. For example, in our solar system, the Earth is the only planet to be in the zone of habitability. 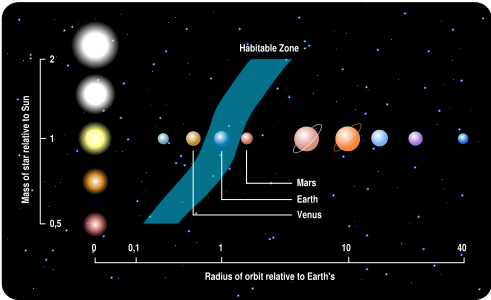 Habitable zone for stars of various masses (Sun in the middle)

For temperature stability reasons, it seems also necessary that the orbit be circular. A too elliptic orbit would imply variations of distance and a situation of extreme instability unfavorable to emergence of the life.

The planet’s mass is also an essential parameter. It must be sufficient so that gravity is able to retain relatively light elements such as carbon or oxygen. But it should not be too large either. In the case of Jupiter, gravity is so strong that no element can escape. This planet is thus consisted primarily of hydrogen, an environment which prevents the formation of the molecules of life.

The planet must also have an atmosphere. Initially because the synthesis of the organic molecules cannot obviously happen in vacuum. Then because this atmosphere constitutes a protective shield preventing the first complex molecules from being destroyed by solar radiations, in particular in UVs and x-rays. 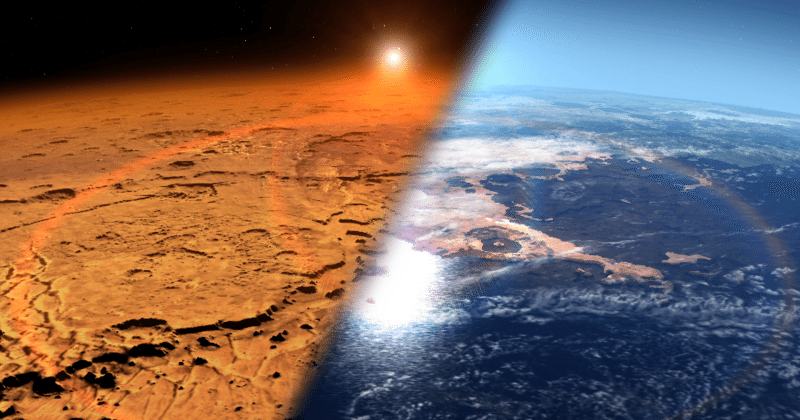 The Mars atmosphere is too thin

In addition to the atmosphere, the planet must have a hydrosphere, i.e. a broad quantity of liquid water. It is in this hydrosphere, which additionaly offers an increased protection against the harmful radiations, that the molecules can gather in sufficient concentration to allow a large amount of chemical reactions. Moreover, water is one of the prebiotic reactions’ necessary elements.

A last necessary element is the lithosphere, i.e. a solid surface. The aggregation of small molecules in stable and more complex sets seems to require it. One of the best way to obtain high concentrations is to place a chemical compound in a certain quantity of isolated water and to partially let it evaporate. It is probably what occurred on the primitive Earth.

What do you think?

Leave us your thoughts below!

. It seems the conditions required exclude the possibility of life ever occurring. Sounds more like God released quarks and gluons, and electrons into an expanding space time environment and took his chances.

A planet harbouring sophisticated life forms would probably need a molten iron core to generate a protective magnetic field. Also, complex life on Earth first developed in the oceans and migrated to the land via fish evolving lungs. This suggests the necessity of an inter tidal zone to support that transition. In turn, this would suggest the presence of a large moon is also critical.

Visit our friends at BonusPromoCode.com for reviews of online promo codes and bonus offers.